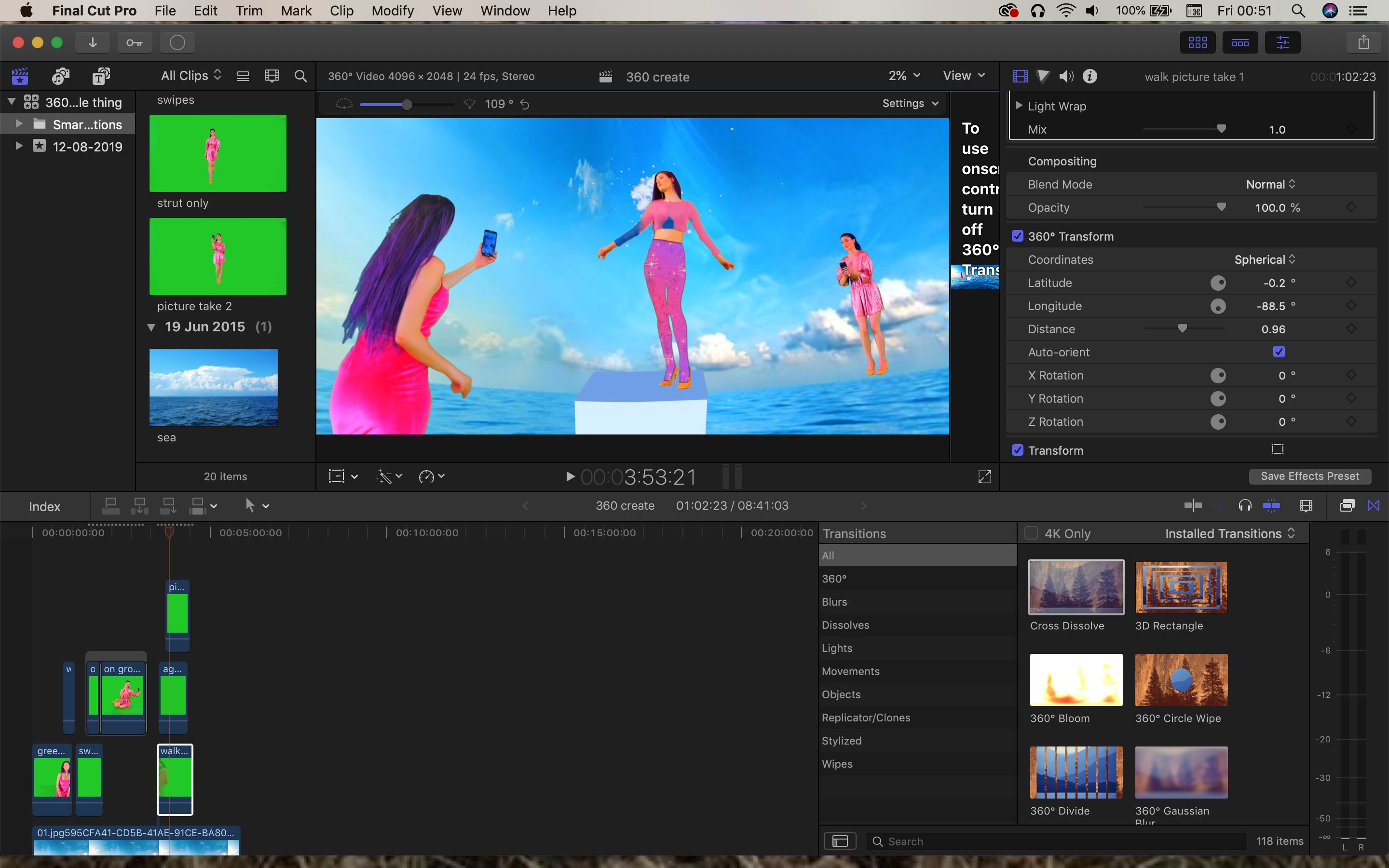 The first thing I did was edit my specific clips movements and green screen them cleanly onto a green background, to then place onto my 360 project on Final cut.

Some clips needed skin faces mapped on, another needed sparkle effects edited onto the triple green-screened clothing and some were just edited to show surreal movements. All these adjustments were done in both final cut and after effects before being keyed into the FCP 360 project, this makes for smoother and more fluid edits and effects as well as easier on the programme as 360 edits are typically slower, taking more power. 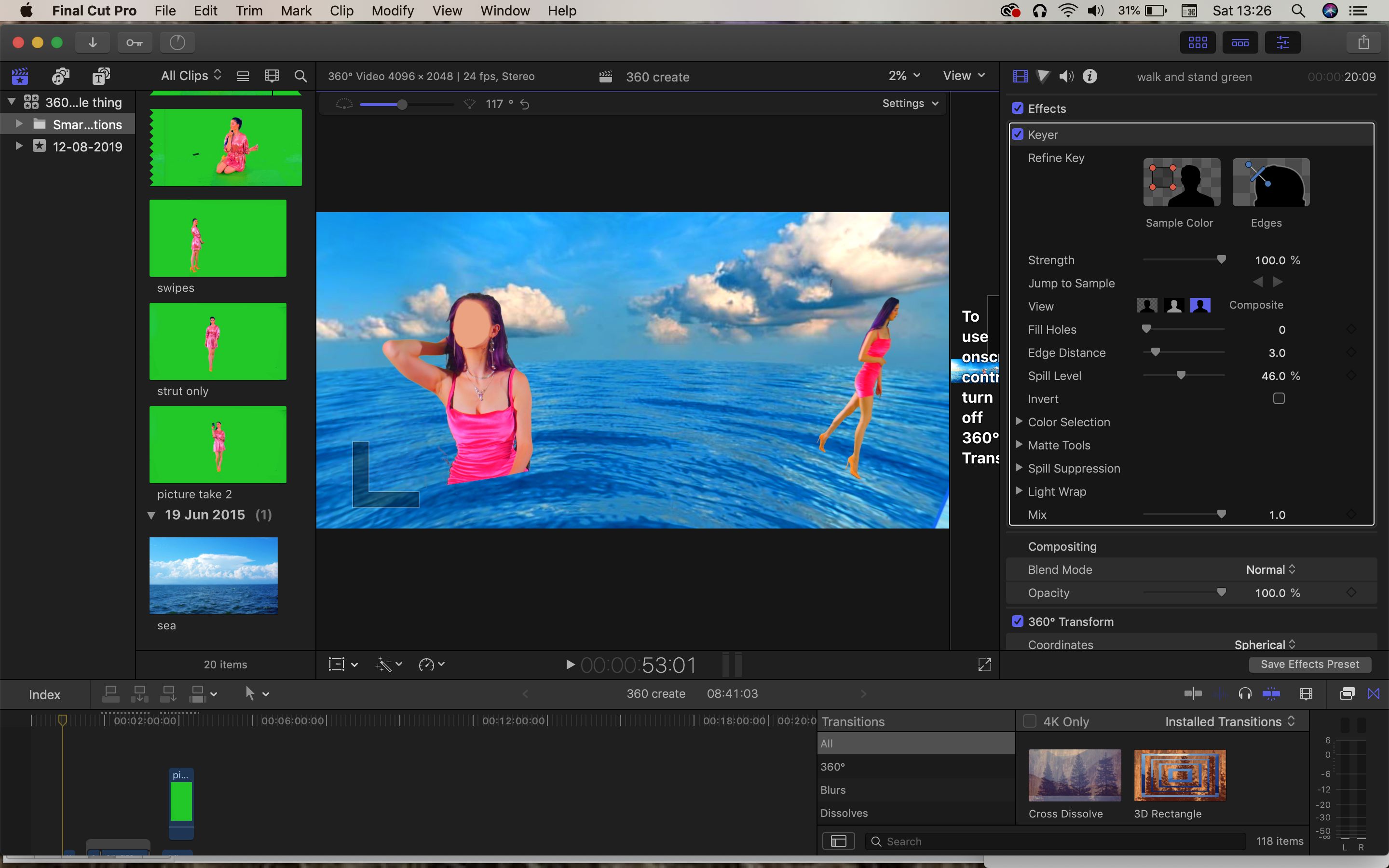 When It came to starting the mapping process of the 360 project I kind of just went in blind, as I had only tested the effect the surround video space had on the 2D clips. At first import they distort to a convex shape. To correct this I adjust the lat and longitudes in the 360-transform menu, ad well as 360 distort to correct the perspectives. This took a little while to get right as it so distorted in first import, I would this is arguably the most important thing to get right because it effects how convincingly immersive the work will be.

I did find myself dipping back into both previous editing projects in FCP and Adobe to re edit some of the more animated clips as I cant exactly edit animate these things in the 360 project. This will be something I will to continue doing throughout the editing process, as I haven’t fully conceptualised the sequence and surroundings. I have got specific wants for some of my surroundings and this video below shows the best way I can create the custom environment. However I will most likely use a mixture of artificially created landscapes and collage elements of real places/ 360 video recorded footage. At least to use as a template for my custom surroundings. With extra layers of vivid outsourced video to layer and change the real life environment. 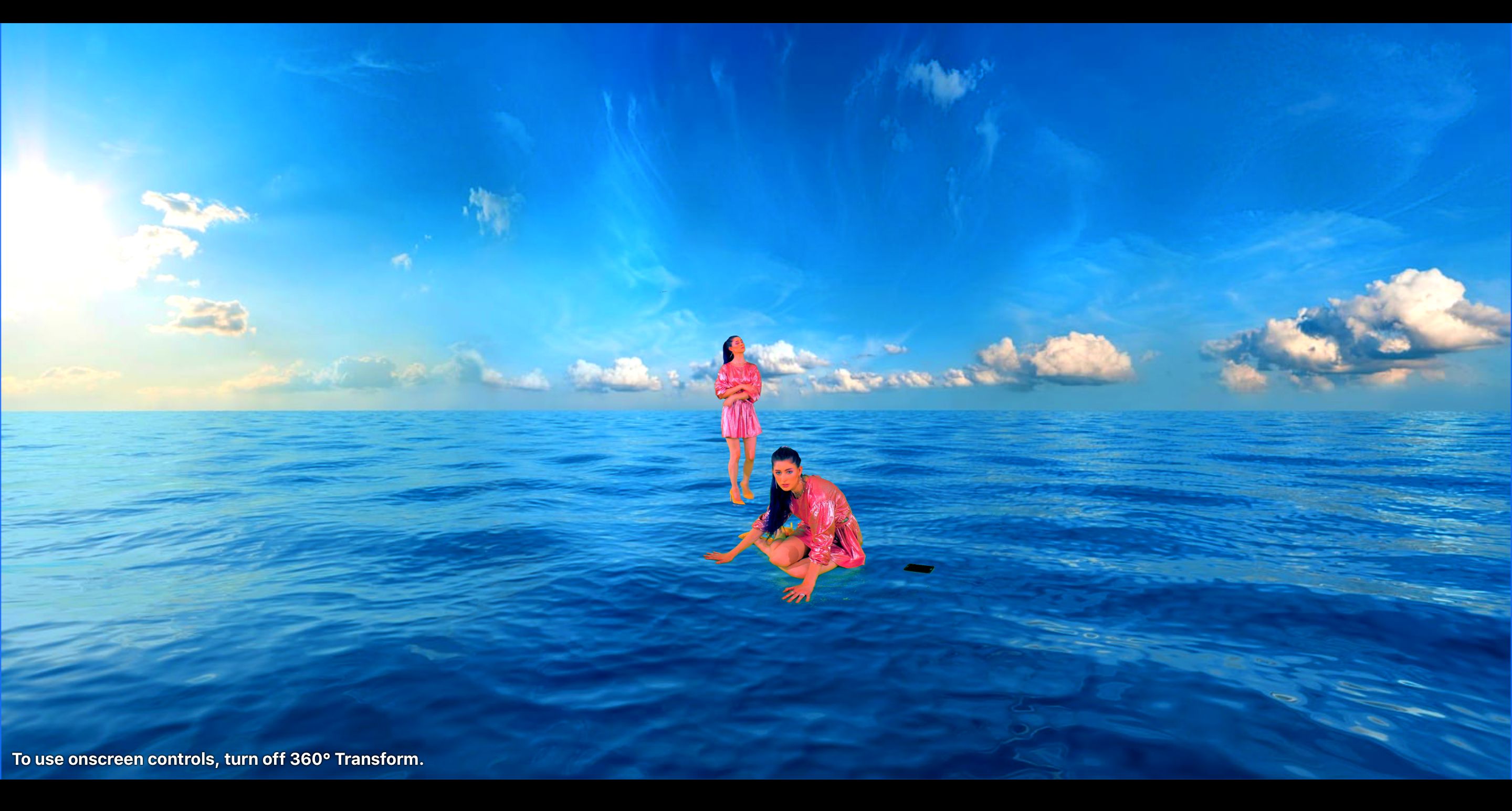 One of the artists introduced to me during one of my early meetings with Richard was Madame Yevonde An early influence in colour photography. I think looking through her work and seeing how she influenced even modern portrait photographers like the famous Petra Collins, now taking the present day place of Yevonde capturing and celebrating the female celebverse. Its actually quite strange how similar these two are in both practice and background. The work it’self reminded me of how beauty lighting can really change a shot, and make something look magical. She photographed celebrities and floriebunda is the biggest celeb in her own world so capturing her was to me a similar ish experience.

A before and after of the edited face.

When I think of what I may want to do with sound on this particular project is a mixture between ambient layers and pop beats. Since its an immersive art and not a game I think plain music would be distracting and not leave enough space in the artwork. I want to include some kind of pop backing, and I think a distant almost faraway pop song (floriebunda’s own) would be a good way of incorporating this. I think almost out of place sound effects for the heeled footsteps, sparkle effect sounds, and some general ambient waves and room noise to fill the environment in whichever state it presents.

Its also important to me that I try and map the sounds to where the movements are as much as possible, however being restricted to only binaural sound with the use of headphones, will make the accuracy more of a presumed guess than anything else. Although this could tell the viewer where it preferred they look at certain times.

Since my last submission to the log I have done a lot on the project, including filming and editing my green screen footage into a VR space.

I started by looking at the world Of VR and how people manage to use editing techniques to create worlds, and not solely relying on code and programming. I looked at artist, Carla Gannis someone I feel relates heavily to my themes and also my techniques, She however is a 3D animator who then puts these works into a VR space as of very recently (in the last few months) which makes me very excited about progressing with like minded artists around me. 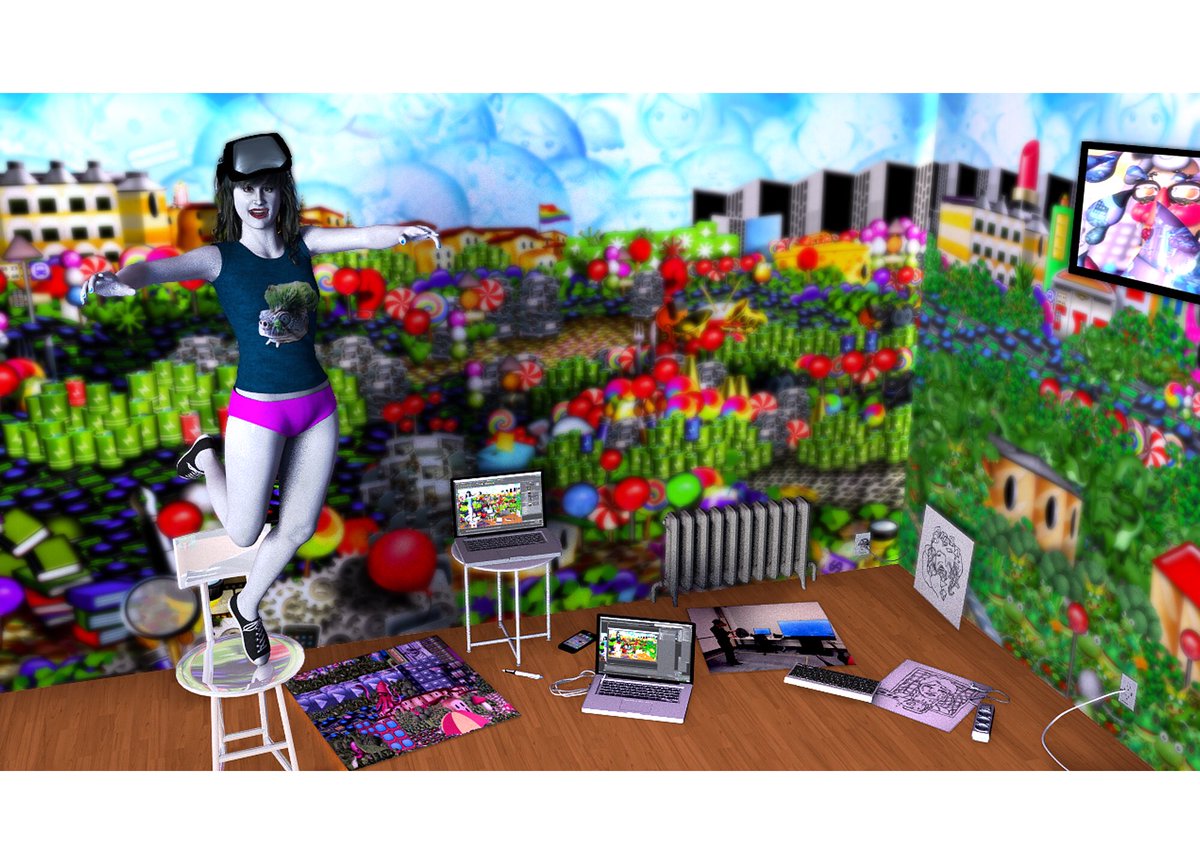 The first step after deciding I would edit footage to fit the surroundings, I set up ready to shoot at The Engine Room on the large green screen, lit with as even lighting as possible. The outfits, typically floriebunda. Pink accessorised and vivid. I love plastic looking materials like a metallic fabric. Also added earrings for the closer shots.

The shot list was rough, but I find going into it with an idea and then seeing what movements work during the shoot leaves me with the best results. 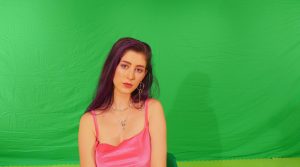 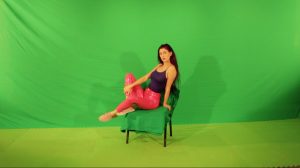 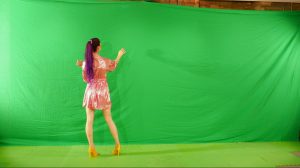 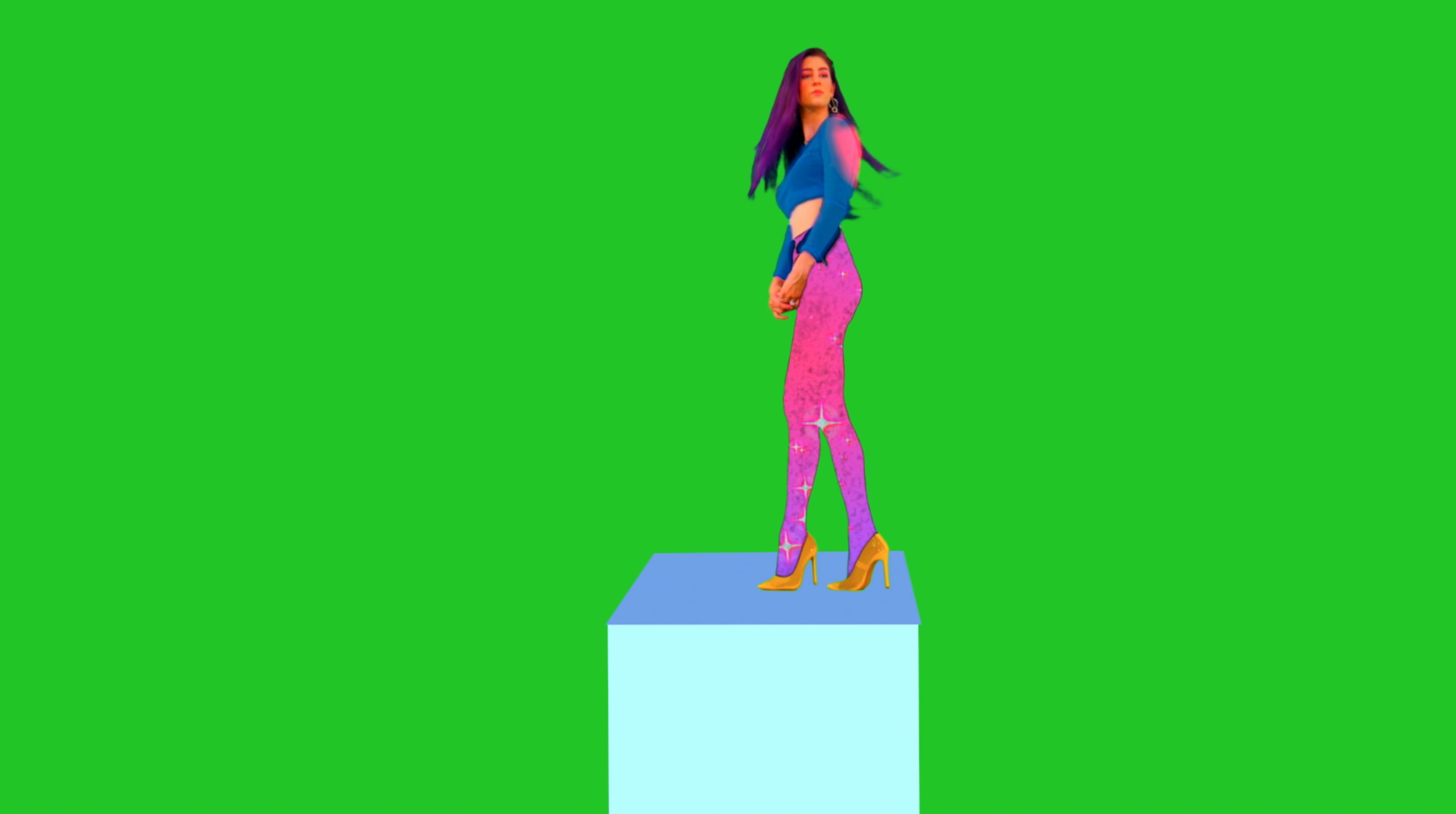 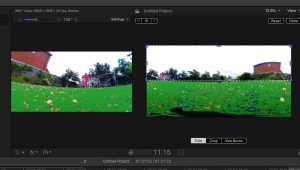 In my first meeting at the engine room I was introduced to the Samsung 360 camera that was available to use, and immediately saw the exciting experiments and room for development in the area of VR that my research has lead me to in my art practice. So right after the session I started to experiment.

My first experiments with the samsung 360 camera consisted of footage my mums conservatory and some basic green screen. I noticed right off the bat that there were mapping errors in the combining of footage, which for me are un-avoidable as the process of joining the two 180 degree pieces of footage is performed by the samsung software, I am yet to look into any way I can adjust this in Final Cut Pro X, but I think I will need to at least cover the fault lines with some edit or other. This is to avoid it becoming distracting and interrupt to experience and sensation of immersion, that VR is so famed for. 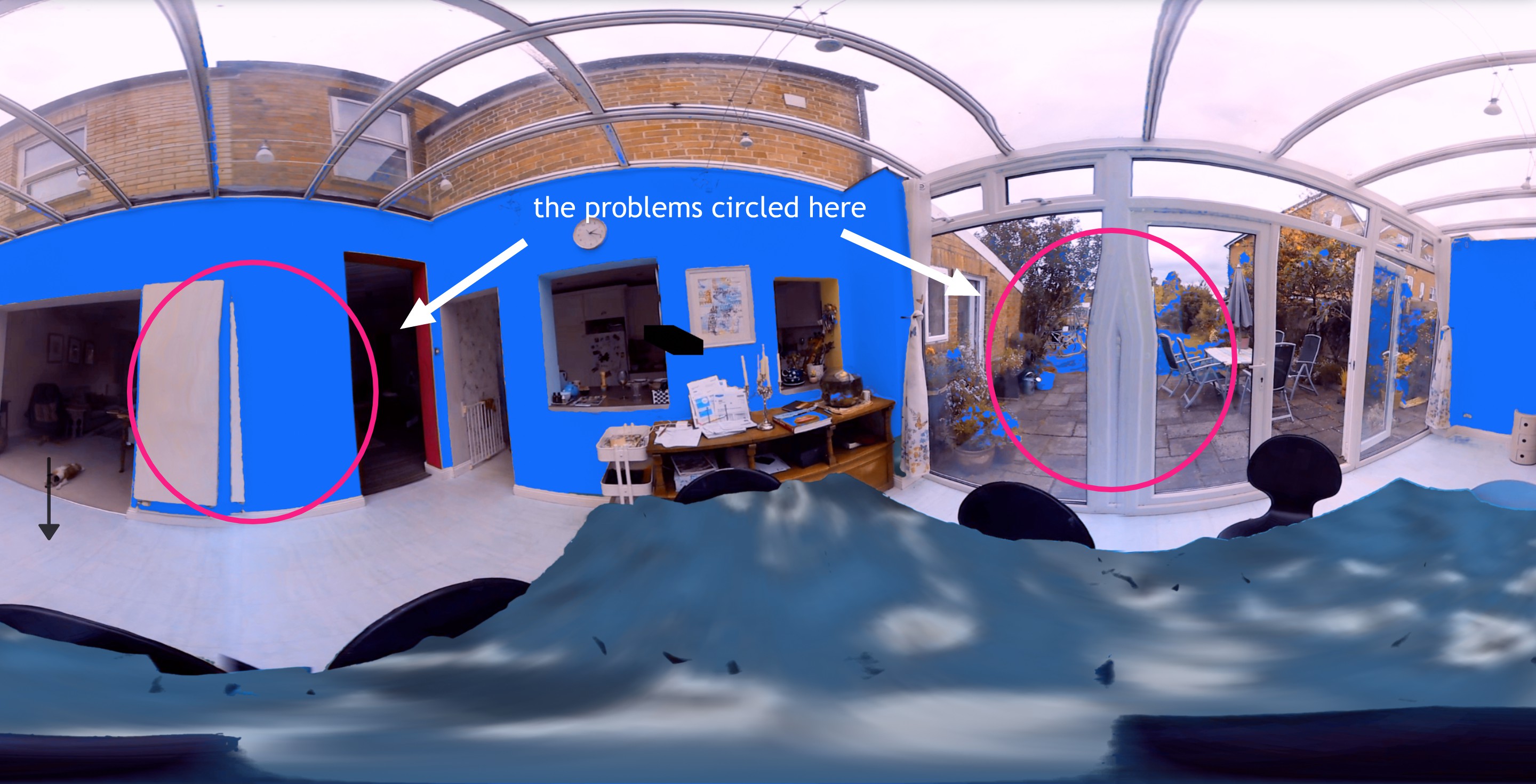 Not only that, but for some reason there is a black shape that appears in all footage taken by one of the cameras. I’m not sure what is causing this, and will have to be careful on how I shoot to avoid it in future tests. 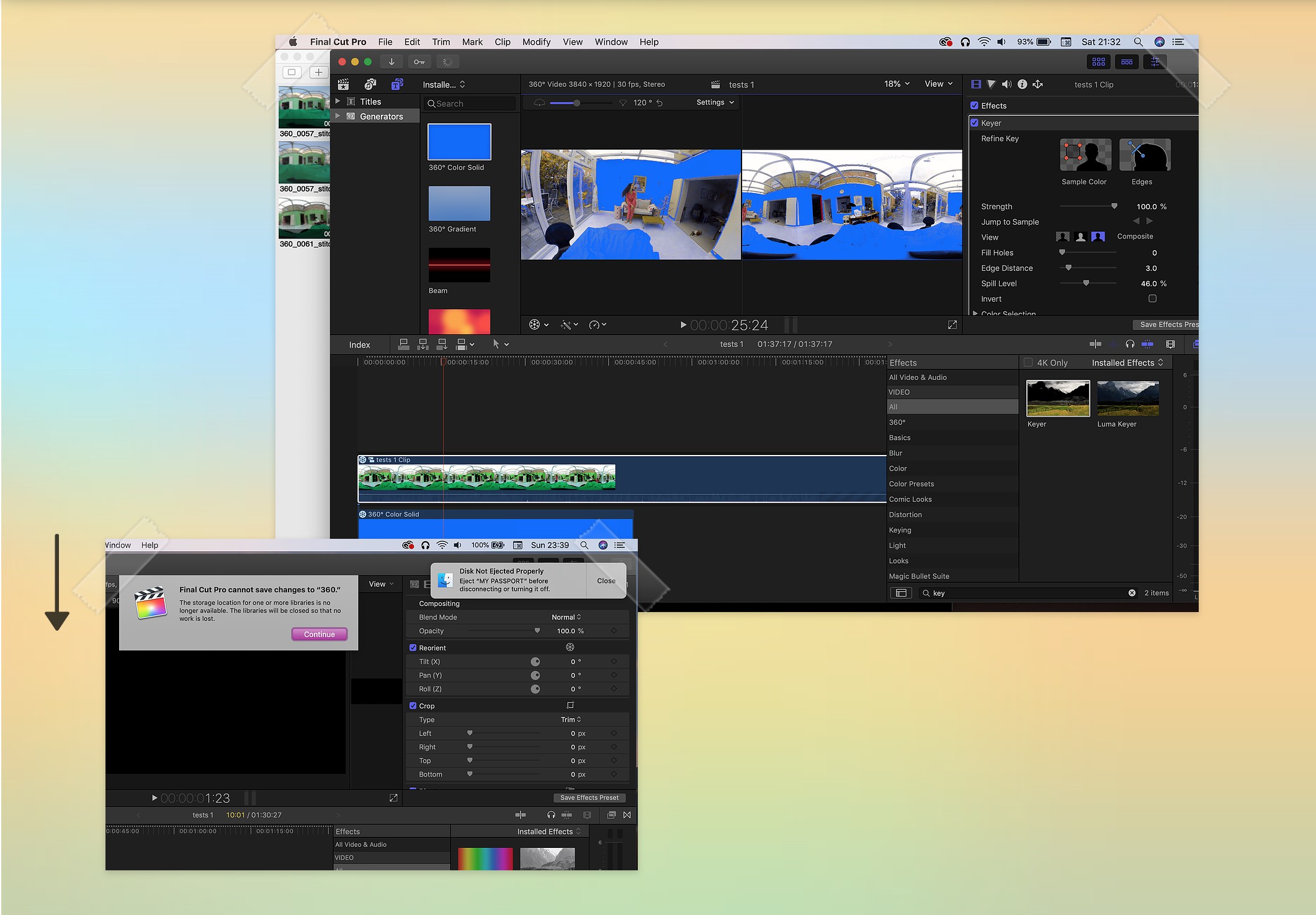 In my second meeting I managed to experiment a bit with layering things on top of 360 footage which worked pretty easily, however the issues occured when it came to mapping the angles and perspective onto 360, having the the engine rom I had trouble with my hard drive which turned out to be a fault in the hardware and not internal, luckily. So I carried on and erased some of my grass and distorted some footage of close up plants and used it on the ground, as well as layering some little bushes over the top.

Editing in 360 is slow, and tricky, the perspective when adding new non- VR elements is something to get used to and learn to work with I think.

My next goal will be looking at more VR creators, and how they make smoother and more customised surroundings to see if creating a environment from scratch would be as effective as recording directly in 360. Because although I love the way this looks, and how easy it is to use I feel as if the quality and ‘messy’ execution of the mapping using this camera is a little too restricting with how to manipulate the surroundings.

Not sure what I will find but will let you know in my next post !

Intro to floriebunda and digital fashions 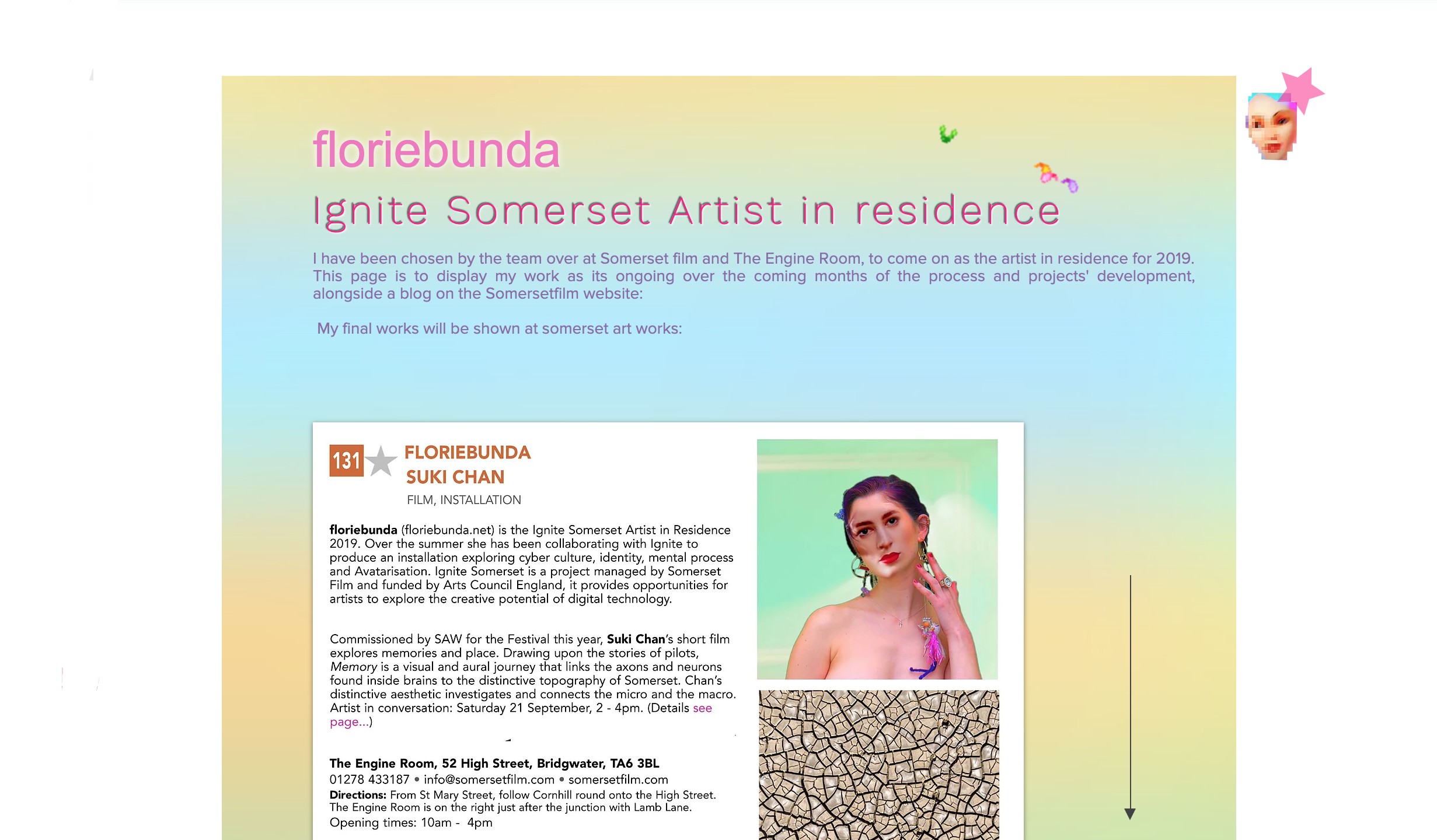 Hi this is my first post on the log! I will be sharing my progress here during the time on this residency, leading up to somerset art weeks. I will also put up work on my own blog featured on my website so, if you want to see more have a look on floriebund.net .

I started this project with the proposal that I would incorporate fashion and a piece I have been working towards developing digital fashions. However My interest in 360 video and VR was equally ambitious and something I could always see myself doing just finding my lack of resource in the area limiting. 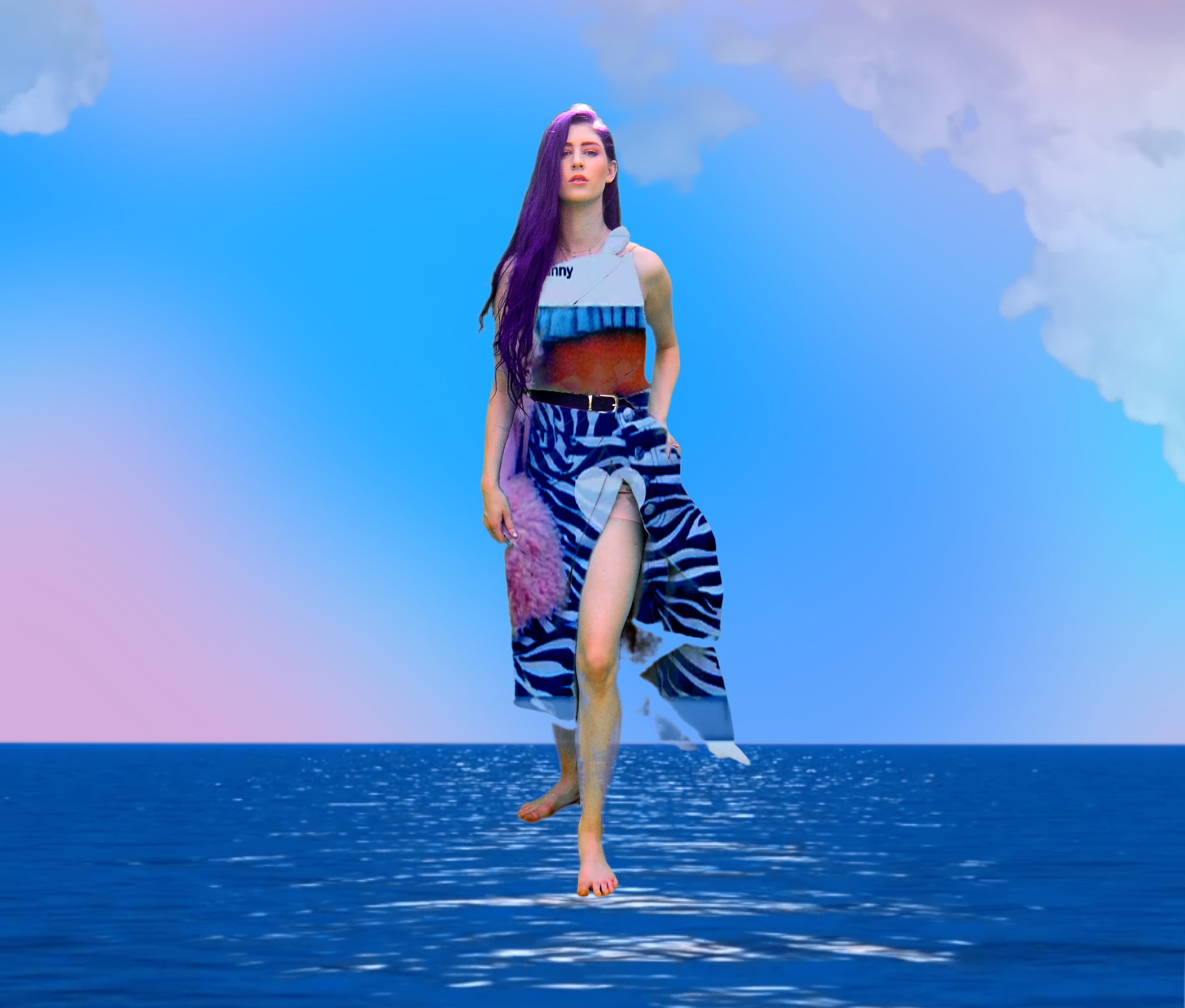 A week prior to my start at the residency I was experimenting with green screen, (as always) and building the very foundations of an idea; in creating the digital garments for floriebunda to wear. The results of this are below, I managed to map and key videos from my online social media use, mixing screen recordings and footage of floriebunda herself to be projected as an object for her to wear. 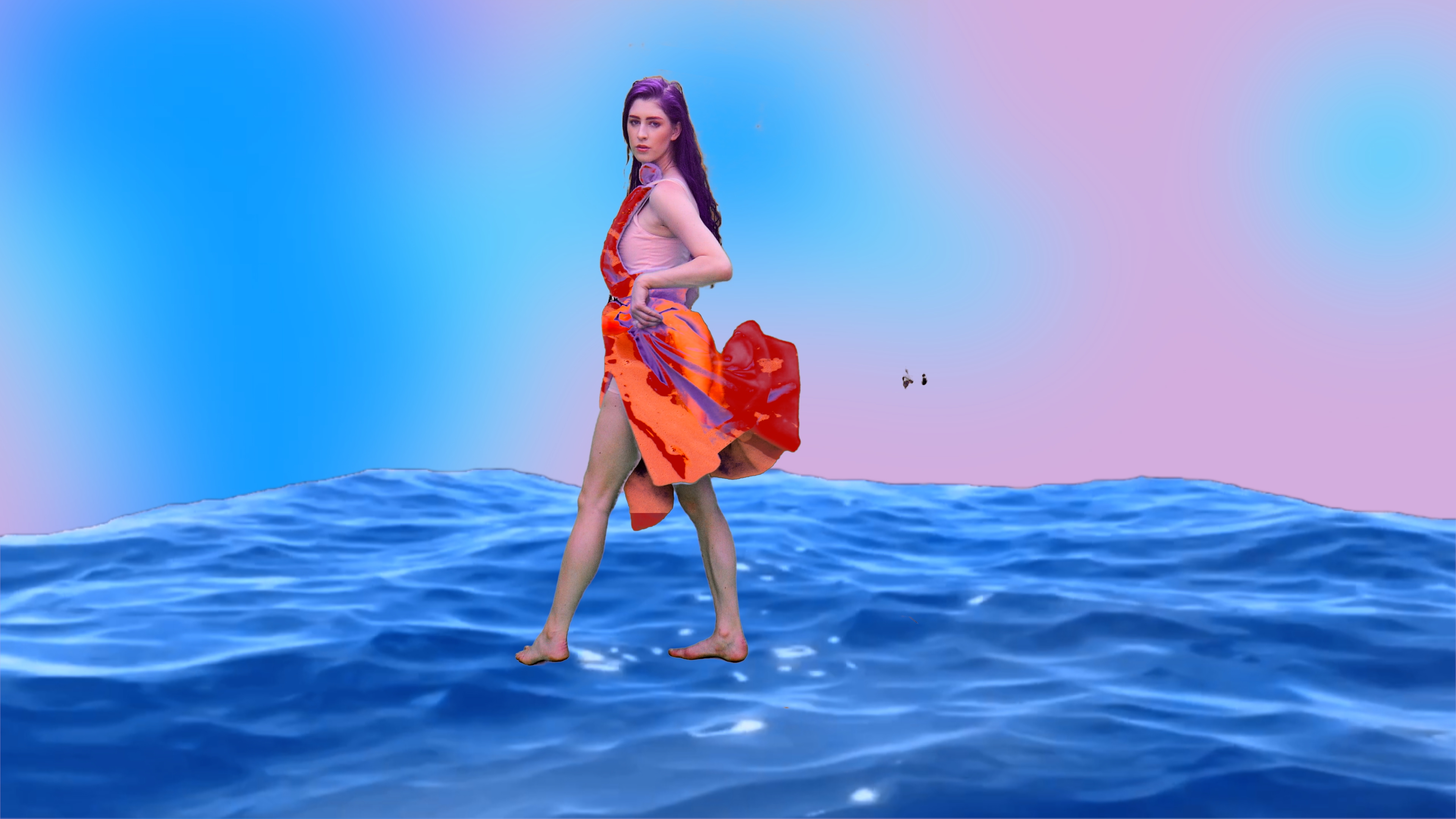 This fashion project is to explore how we present ourselves online through ‘dressing up’ with things that we believe represent us, or show ourselves in the best way, a look at fashion and identity. The modern progression of this concept is using our online activity and presentation in this space, to show how we want to be seen and represented. We then stylize this, showing this on our bodies online before posting it; only to become as object as the garments themselves.

I try to imagine what I would wear as floriebunda and honestly its something digital, beautiful but also somehow self-oriented.

It will be interesting seeing this idea develop into a immersive space. 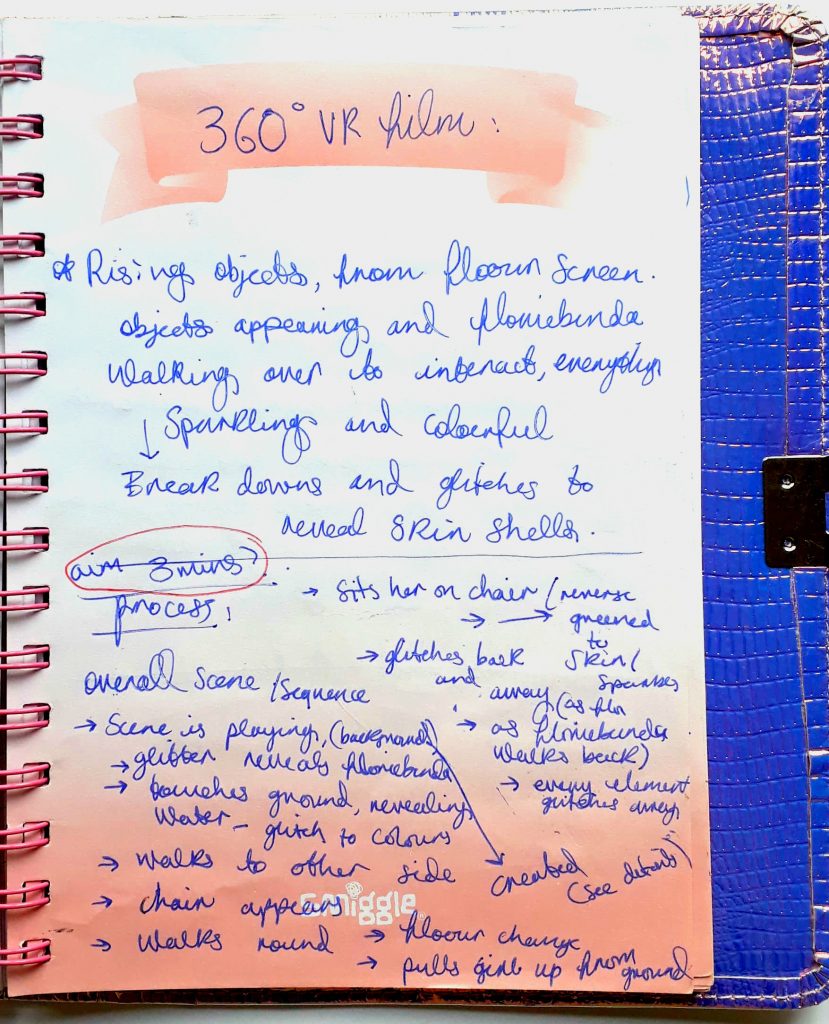